We were delighted to have Daniel Stori onboard with our #OpenErlang celebrations. As an open source advocate, Daniel put his two fine talents - open source programming and illustrating - to good use when creating the #OpenErlang comics.

Software specialist, Daniel Stori has been in the industry for the past 20 years. He has been working in C, C++, Java, JavaScript, Golang, Python, Ruby, etc. Nowadays, he is working with cloud computing related technologies, specially with Kubernetes.

Intrigued about where his inspiration has come from, we decided to grill Daniel on getting young people into coding, the appeal of programmer humour, and why programming and creativity aren’t so far apart after all…

Q: How did you get involved with the #OpenErlang campaign?

A: I received a message from Erlang Solutions Team to be part of #OpenErlang party in the last year. Initially, the idea was to do some live drawing at the party, but I had some health issues at that time, so we decided to do a kind of remote live drawing instead. From there, we continued collaborating.

Q: Why did you agree to get onboard with #OpenErlang?

A: Because of the 3G: Great people, Great community and Great technology.

A: I never had a chance to work in an Erlang project but I have studied it a lot in the last years. I think that Erlang is wonderful because you need to think in distributed systems from the very beginning.

Q: What is your programming language of choice and why?

A: I’ve worked as a software developer for 20 years, my primary language in the last few years was Java. Today I am more involved with devops tools, primary with Kubernetes. So golang and Javascript (nodejs) are my favourite languages nowadays.

Q: Many would think the programming/developer industry is very mathematical, and it is, but how is it also creative?

A: I think the industry has always demanded creativity over time, but with different approaches. In the past, the problem was less complex but the resources were very limited. Today we face more complex problems, but we have tons of ways to solve them.

Q: How would you describe the creativity in programming? It’s like a blank canvas, right?

A: I think it’s hard to describe creativity. Maybe this subject deserves a comic ;) I think there is not a rational path to creativity, it’s more about inspiration. 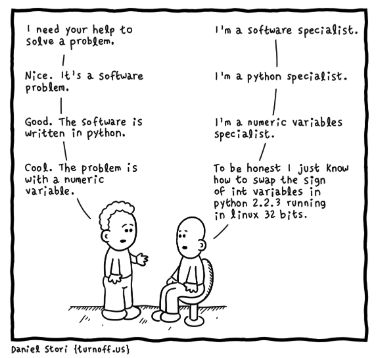 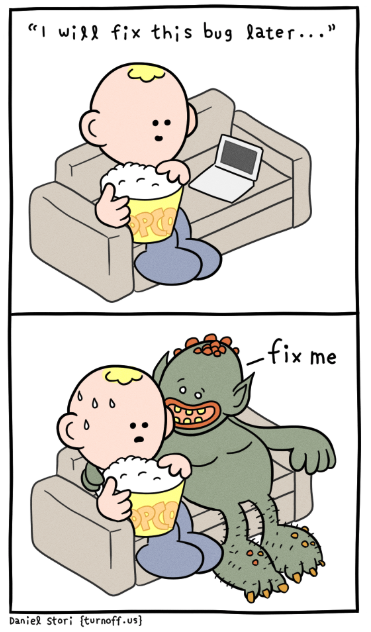 Q: What came first for you, the illustrations or the programming?

A: When I was a little kid, I used to do cartoons with my family, so I think drawing comes first. I started to play with code when I was 12, 13 yo.

Q: Where do you get your ideas from?

A: I’ve worked in the industry in the last 23 years. The day-to-day running of the enterprise world is an endless source of ideas. Also the community itself, the online forums. We have a very controversial community.

Q: In what way controversial?

You know, we have a very passionate community, I think. People are used to defending their os, language, framework or technology like their family. In this scenario, it’s kind of easy to create jokes, because jokes always target a group. 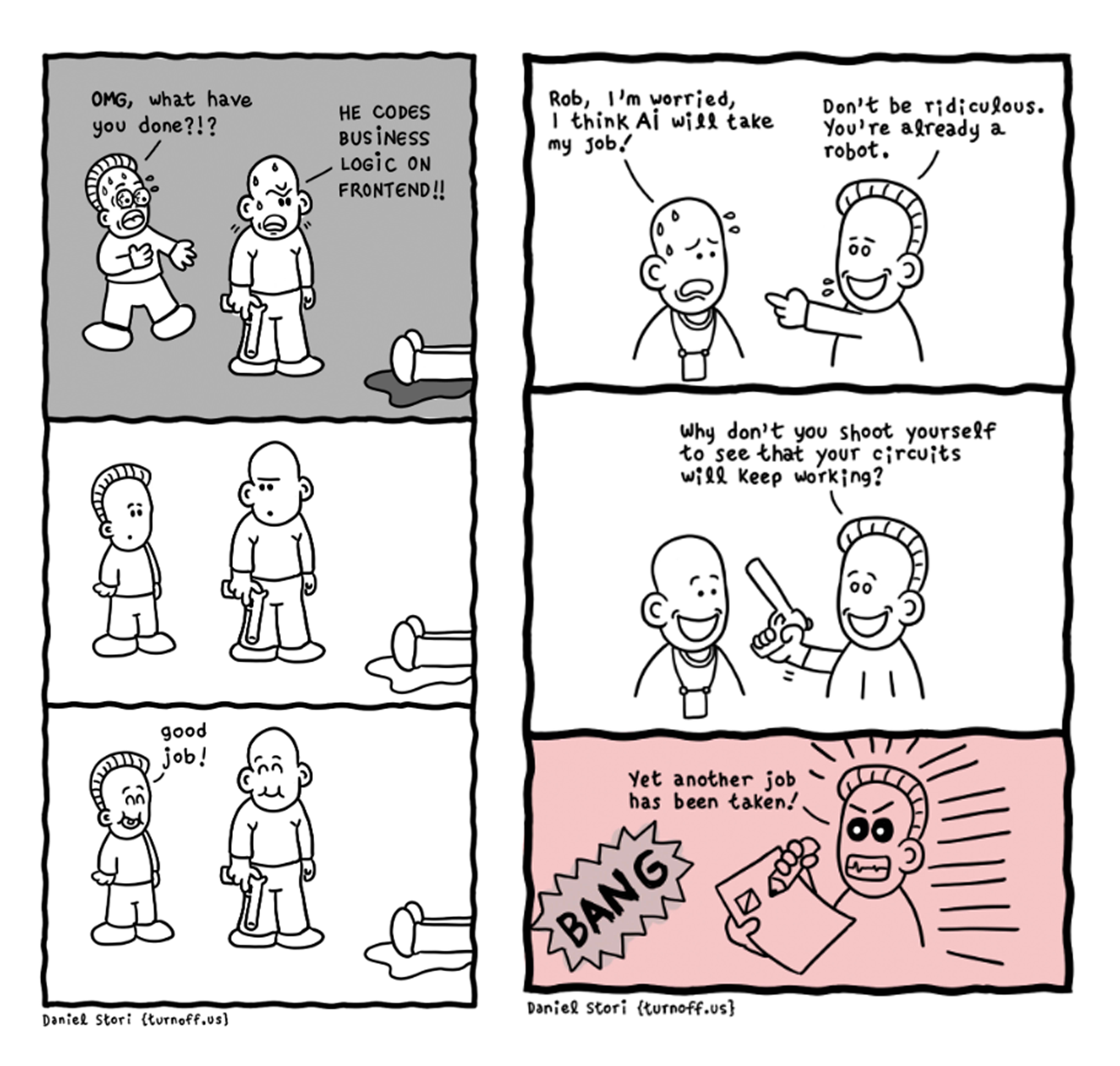 Q: Has any idea gone awry?

A: Not a specific idea. Sometimes people think I am a kind of misogynistic person because I don’t put girls on my comics. The reality is that I really find it difficult to draw women! I also have difficulties to draw people looking to the left, so I use to draw them looking to the right and I swap it using the software.

Q: How do you deal with accommodating all programming languages? What sort of issues have you come across in the past?

A: I know that is cliché, but I really believe that different programming languages solve different problems. Erlang/Elixir is the first thing that came in mind for high scalable/resilient software. For classic enterprise software, maybe Java / c#. If you need to build easy to deploy tools for DevOps world, maybe Golang or Python. For web apps, Ruby, Node, etc. I know that these languages can solve other problems, but they work better in their domain.

Q: What’s your favourite selection of comics and why?

A: When I was a kid, I was Disney addicted. I also used to dig Monica’s Gang (Brazilian). Today I like alternative authors, like Noah Van Sciver. 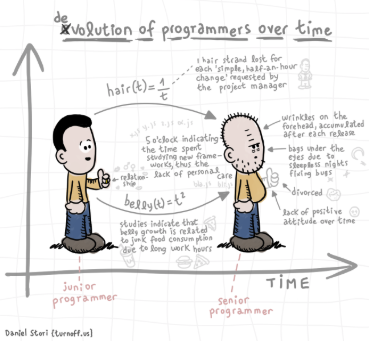 A: My guess is because programmers are almost always online. In addition, we are more accurate when we do so directed humour.

Q: Do you have any tips when it comes to inserting more creativity in day-to-day programming?

A: My gold tip is to pass some time offline, not programming. Doing another kind of activities always help me to have good ideas for my programming issues. 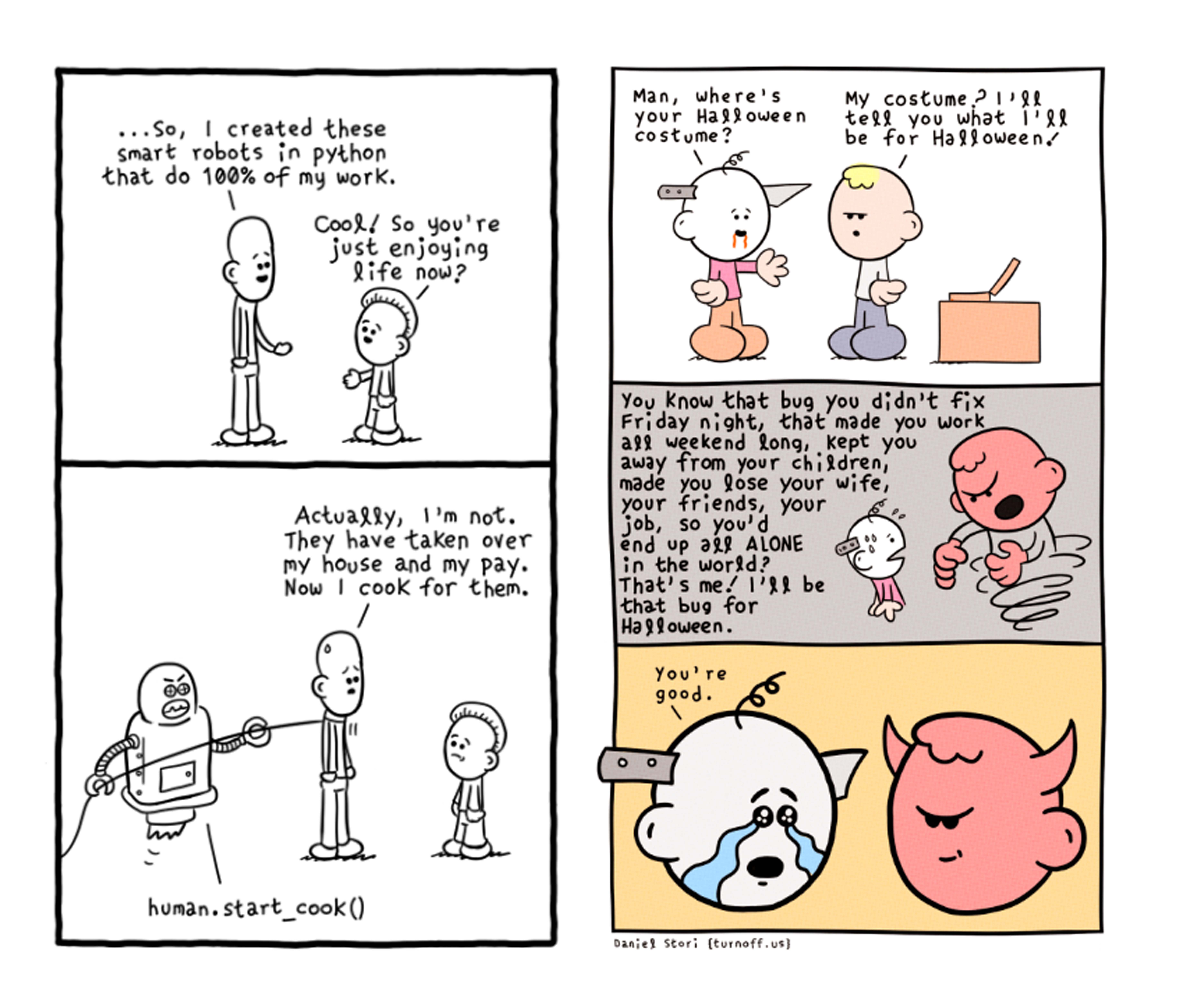 Q: How about getting young people and other groups into coding? Wouldn’t highlighting the creative aspect of programming help to encourage growth in the industry?

A: In my days, programming was limited to nerds (like I was). We were weird and we liked to be weird people. I think today the community is very open to other groups because programming is hype. The hype is good to attract different people, with new mindsets, and this is very positive.

Q: Do you have any resources to help creativity flourish within programming?

A: Doing different activities. I like to do Yoga, meditation, cycling, watch movies, etc. Also, social interactions always help me to have new ideas. Sometimes we have a very well-defined approach to face a problem, so it’s important to share with other folks with different mindsets.