During the last year, we have been working closely with POA Network improving one of the systems they run. Erlang Solutions Elixir/Erlang Developer and Architect Felipe Ripoll will look to explore the ins and outs of the NetStats System Dashboard in this latest post.

At Erlang Solutions we provide Erlang and Elixir Consultancy but what does POA Network do?

Simply put, they are running an Ethereum-based network but with a new Consensus Mechanism type called Proof of Authority, and they have this to say:

“POA Network is an Ethereum-based platform that offers an open-source framework for smart contracts. POA Network is a sidechain to Ethereum utilizing Proof of Authority as its consensus mechanism. POA provides developers with the flexibility to code in Ethereum standards with the added benefits of POA Network’s solutions to scalability and interoperability in blockchain networks.”

In this blog post, we will focus primarily on the dashboard we have created, however, if you want more information on the POA Network you can check their website where they concisely explain what they are doing, and you can also check the code! You’ll find info for this at the bottom of this post.

For this kind of system, it is critical to have a tool capable of checking the status of each Ethereum node in the network. That is why it has been already created. It is called the ‘Netstats’.

The first version of this tool was originally split into two different projects by POA Network: the Agent and the Dashboard. Both were written in Node JS. 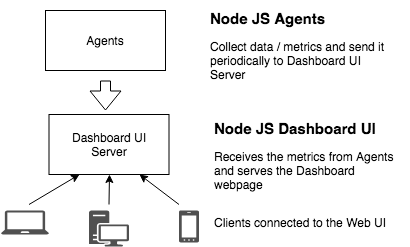 The solution based on a NodeJS approach, although responding successfully to a number of critical requirements, exposed the following weaknesses:

Our aim was to provide a solution which offers a response to the described weaknesses. Simple as that!

In order to fix the extensibility issue, we decided to provide the system with plugins so that one can easily create own plugins in order to get the specifically wanted metrics.

That plugins mechanism helps with the Persistence issue too. In fact, one can create a plugin which, instead of sending the data to the Dashboard, stores it into a database. One can then create another plugin for the Dashboard communication so the same metric would go through the two plugins in a pipeline.

For the Scalable issue, we decided to go with Elixir…

We chose to continue with the system split into two parts; the Agent and a Backend Server. This server is called now the Warehouse. Agents collect data in the nodes and send them to the Warehouse periodically.

The Plugins mechanism are present in both the Agents and the Warehouse. With the agents, one can create plugins for different kinds of metrics. In the event that metrics need to be routed to different destinations, data can be sent directly to a warehouse server using one plugin and to a database through another plugin. With the warehouse, the plugins will be used to select the type of protocol to use while communicating with the Agents. In addition, we can use plugins to determine what to do with the data. For instance, send it to the Dashboard UI or store it into a database. 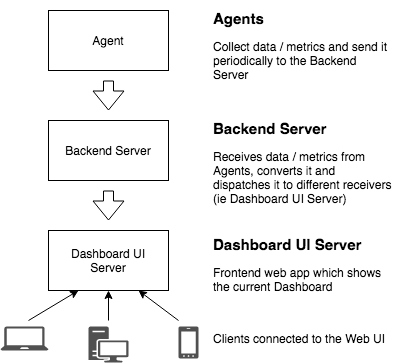 The main role of the new Agent is the same as the original Node JS Agent - collecting data. In the previous version, the Agent would only read the Ethereum metrics and send them to the Dashboard UI. Now it has been made more extensible with the ability to read different types of metrics and send the data to different destinations like the Warehouse, the database or others.

In order to achieve this “extensible” feature, we designed the previously mentioned Plugins mechanism. This mechanism is simple, we divided the Agent into three parts; the Collectors, the Core and the Transfers where the collectors and the transfers are now plugins. That means we can create collectors (for collecting specific kind of metrics) and transfers (in order to process the metrics as we want. For example, sending it to the Dashboard UI, storing it in a database or whatever we want). 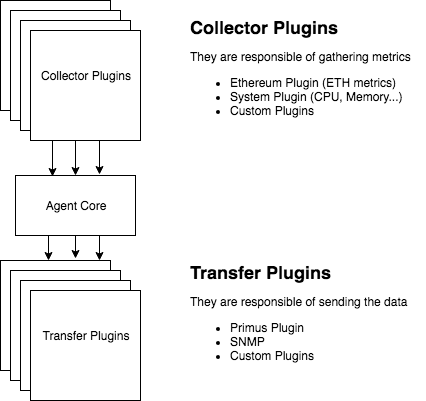 The Warehouse is the Backend server. The Agents connect with this central server and send the metrics to it. The main task is to receive the metrics from agents and dispatch them to the final consumer.

Very similar to the Agent’s architecture, we split the Warehouse into three components to achieve the “extensible” feature; Custom Protocol Handlers, the Core and Receivers. 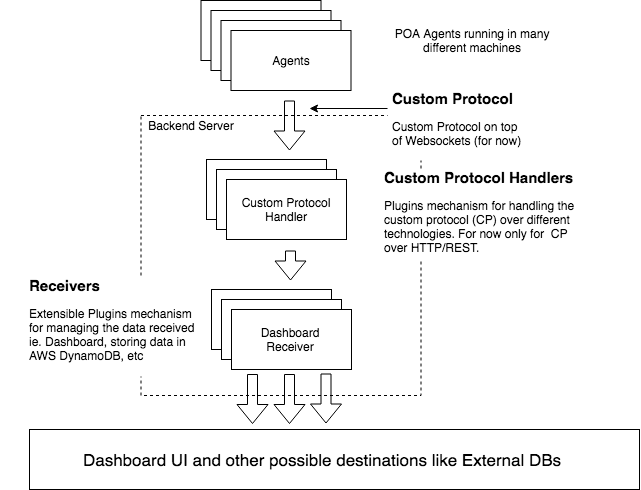 We have described the Agents and the Warehouse but, where is the webpage for the Dashboard UI? Well, actually we didn’t speak about it yet.

We decided to reuse the Node JS code we had for that Dashboard UI webpage so we had to make some changes:

Now the client’s web browsers will connect to the same Dashboard UI and will continue having the same user experience.

If you’ve enjoyed this article, and wish to know more about our work with POA Network, our latest webinar on Blockscout is a must! We’ll be speaking to Project Lead Andrew Cravenho on how users are consuming blockchain, and the blockchain architecture surrounding this new project.

Our latest Blockchain article by Scalability Architect and Technical Lead Dominic Perini has already received high recommendations from the programming community. We’ve worked on a number of brilliant FinTech projects over the last year, and Dom (and a few others in the Erlang Solutions team) have created this in-depth overview. Find out what all the fuss is about…

All POA Network code is open source and available on github. Check out their website and follow on social for more update on POA and our collaborations! Their Twitter, in particular, is very active.