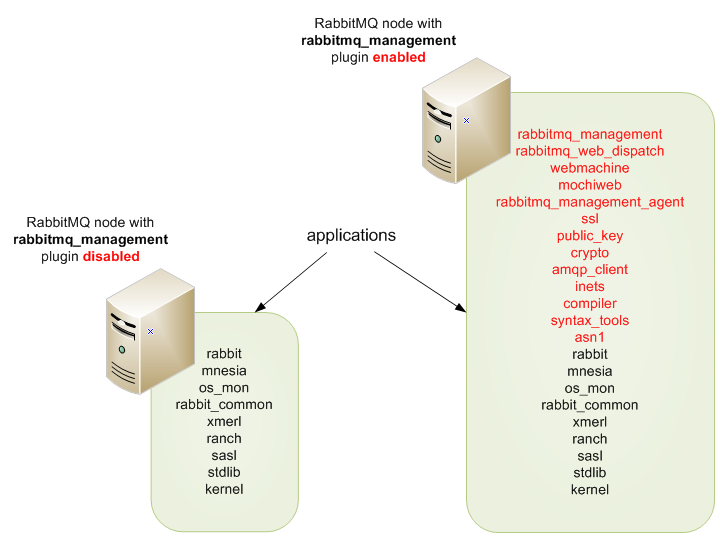 In an ideal world, RabbitMQ nodes should be dedicated to delivery of the AMQP protocol (queueing and message interchange logic between connected clients). All potential burdensome operations like UI monitoring and management should ideally be taken care of on a completely independant node; deployable on a separate physical machine from the RabbitMQ nodes, for all OAM functions. This is how telecoms systems have addressed monitoring and operations for decades. This inflexibility of the RabbitMQ Management plugin and other monitoring tools dependant on its API brings to light the main strengths and advantages of using our tool WombatOAM [4]. Illustrated below, is the application overhead WombatOAM introduces on a RabbitMQ node;

So what is different about the WombatOAM approach of monitoring RabbitMQ? Firstly, only 1 additional application is introduced, which is the wombat_plugin, unlike the 13 additional applications which are introduced by the RabbitMQ Management plugin. The reason behind this is the fact that WombatOAM only requires a single and very lightweight application, which is the wombat_plugin, on the node it’s monitoring, to relay all metrics and events to a separate and independent node, responsible for carrying out all heavy computations and UI related operations. This implies a much less, if not negligible, application overhead on the RabbitMQ node in comparison to that introduced by RabbitMQ Management plugin, which carries out all of its computations and operations on the RabbitMQ node, itself.

WombatOAM thus fully leverages distributed Erlang by carrying out its major operations and maintenance functions in a loosely coupled manner, on an independent and separate node. This grants much more freedom to the RabbitMQ nodes to predominantly be focused on carrying out AMQP functions, only, with very little or no chance at all, of experiencing any problems relating to UI operations and maintenance functions.

The following results were captured from a benchmark test executed against a RabbitMQ node; first as a standalone node, next, being monitored by WombatOAM, and finally with the RabbitMQ Management plugin enabled (without WombatOAM). This test was carried out on a 2GHz Intel i7 8 core MacBook Pro, with 16G memory.

In addition, this same test may also be carried out with WombatOAM being used to monitor a node with the RabbitMQ Management Plugin already enabled, in order to gather and analyse hundreds more related metrics, alarms and notifications from the virtual machine that RabbitMQ runs on. These metrics, such as process memory, atom memory, Mnesia and TCP specific metrics, and much more, are are not available from the RabbitMQ Management Plugin.

NOTE: These tests could also yield varied results depending on the hardware platform on which the test RabbitMQ nodes are installed on.

You can ask for a free 45 day product trial of the WombatOAM package by contacting us at general@erlang-solutions.com or by filling in the ‘Request a Demo’ form on the product page.  The package will be accompanied with the WombatOAM documentation, and easy to follow installation procedures to get it up and running in a very short space of time. 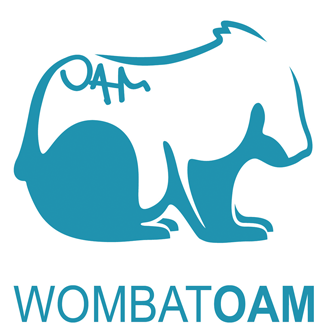 Next up, I’ll discuss following WombatOAM features, in the context of RabbitMQ;

WombatOAM has a vast number of other features and capabilities, explained and illustrated in greater detail in the WombatOAM documentation.

One of the primary purposes of the WombatOAM RabbitMQ plugin is metrics acquisition and processing from the RabbitMQ nodes it’s connected to, and presenting these metrics on the WombatOAM UI. WombatOAM provides a number of RabbitMQ specific metrics such as publish rate, deliver rate, messages ready, messages unacknowledged, connection related metrics, and so forth. A total of 49 RabbitMQ specific metrics are currently provided by WombatOAM, and additional metrics can easily be developed if required by WombatOAM users.

In addition, WombatOAM also provides an extremely useful feature of defining upper and lower bound metric thresholds, from which alarms will be raised when these metric limits are exceeded. This means support engineers are never caught by surprise when certain event limits are reached.

RabbitMQ users have to manually dig up the log files, copy them across from remote servers, analyse them line by line, in order to get an indication of the events and alarms being raised in their nodes. This can be a tedious and time consuming exercise to carry out, especially when problem resolution is required in a very short space of time on your production environment. However, with WombatOAM installed, events and alarm notifications are presented in a very user friendly manner, on a dashboard, under the Notifications tab, with minimal effort from the user, as compared to manually locating and reading up log files.

WombatOAM alarm and event notifications go on to provide even more information than what the native RabbitMQ logs would expose, for example code version discrepancies. Without WombatOAM, many problems, only detectable by using WombatOAM, would only be discovered during post-problem diagnosis, when the RabbitMQ nodes have already suffered from the side effects, and in some cases, may even have gone down. This is the definition of preemptive support, which is a shortcoming of many monitoring systems, except WombatOAM, which excels in this area. The last chapter, 16, of the text, Designing for Scalability with Erlang OTP explores preemptive support in detail, and why it’s extremely crucial in the operations and maintenance activities of any system, (whether or not Erlang based), such as RabbitMQ. Quoting part of the text:

Preemptive support automation gathers data in the form of metrics, events, alarms, and logs for a particular application; analyzes the data; and uses the results to predict service disruptions before they occur. An example is noticing an increase in memory usage, which predicts that the system might run out of memory in the near future unless appropriate corrective actions are taken.

Another powerful feature which WombatOAM provides is configuration management from the user interface. RabbitMQ is heavily configurable from the rabbitmq.config file, and from the application resource files of all its associated plugins. WombatOAM gives full visibility of all application environment variables, which, in RabbitMQ are all the configuration parameters defined in rabbitmq.config file, as illustrated below; 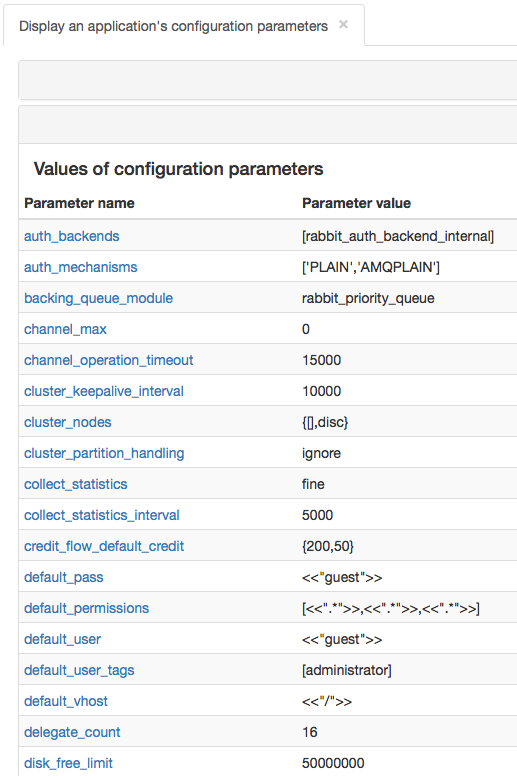 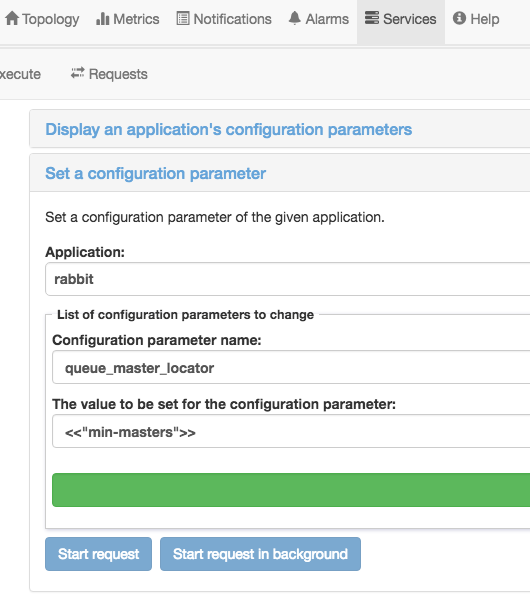 NOTE: It must be clarified that not all configuration changes will be applied. Some settings are cached, for example, channels retain channel_operation_timeout configuration in their cache. So the new value will not be applied to already created channels, only to new channels created thereafter. 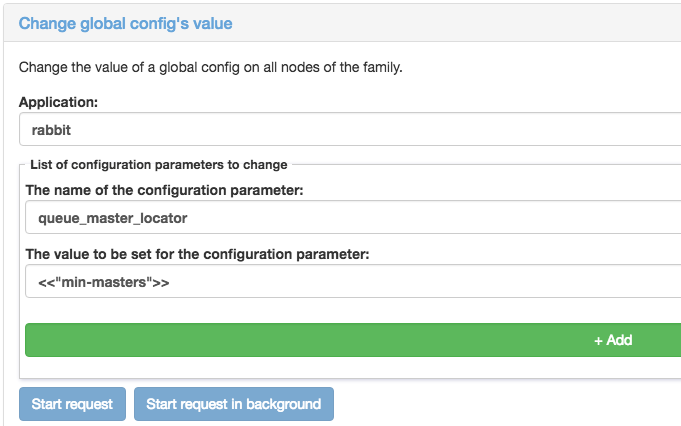 WombatOAM grants a high degree of control over the RabbitMQ nodes it’s monitoring by providing an interface to execute Erlang native functions. This is found under the Services tab of the WomabatOAM UI. This means that AMQP equivalent operations such as queue and exchange declarations, or, native RabbitMQ operations like mirror policy definitions, and control operations (like listing of queues, exchanges, connections, and so forth) may be executed from the WombatOAM UI.

NOTE: This feature will, in the near future, be replaced by a more user friendly and safer means of executing control commands. This should also help avoid the continuous and repeated re-entry of such commands, if executed in a frequent manner.

WombatOAM also logs these executed control commands as part of its Notifications, making it possible to carry out minor and/or major audit trail operations, to investigate which commands were executed, and when. This is very useful when, for example, troubleshooting a problem’s cause resulting from human intervention on the RabbitMQ nodes.

Other useful RabbitMQ control functions you could execute from the WombatOAM interface are summarized as follows (you can copy, modify and use these as you like):

The image below illustrates these control categories;

WombatOAM has a powerful feature, extremely useful for RabbitMQ support and development engineers, which allows them to explore node processes and ETS tables, (including the rabbit_queue table, which consists of all alive queues on the nodes). The image below depicts the categories which may be explored;

A question often raised regarding WombatOAM and the RabbitMQ Management plugin is;

“….which is the right tool to use, and on which occasions?”

Both these tools may be viewed as complementary to each other. Despite WombatOAM’s superior capabilities to provide more than just RabbitMQ metrics, but also a vast number of events, alarms, Erlang VM node specifics, and so forth, the RabbitMQ Management plugin does also provide useful features, like, for example, manual publishing/receiving of messages from the UI, plugin specific operations like creation of links and upstreams for the Federation plugin, and so forth.

Hence, bearing this in mind, recommendation and best practice is to use both tools in the following manner;

With WombatOAM continually enabled, and the RabbitMQ Management plugin enabled on specific occasions only, when required, common RabbitMQ problems such as nodes raising VM High Watermark memory alarms due to excessive memory usage beyond that permissible, would hardly be ever experienced, since these are attributed by UI operations of a high memory footprint. Unless of course, the root cause is something else not directly related to, nor attributed by, memory hungry UI computations and operations, and also, the basis is not on any hardware limitations on which RabbitMQ is installed on. This is just one major example, amongst an abitrary number of many other problems, which would be alleviated by making use of WombatOAM in this manner. 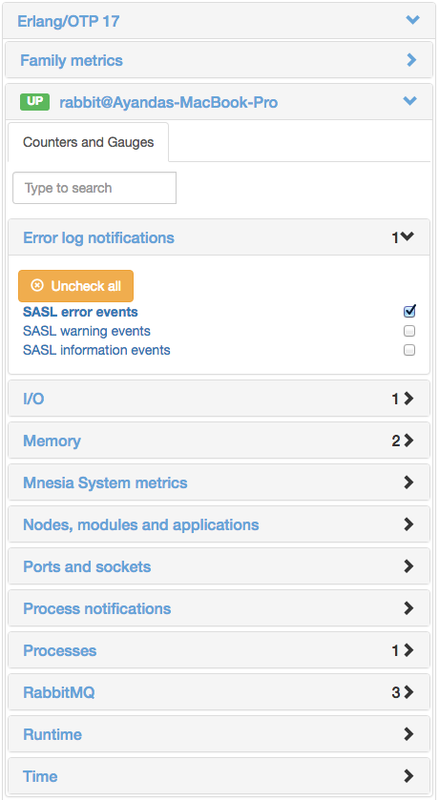 Each of these metric categories are both rich in the information they provide and crucial in monitoring any RabbitMQ installation, and in essence, any Erlang based system. For example, Memory and Mnesia System metrics would be critical for any RabbitMQ installation, as all metadata (queue, exchanges, bindings, and so forth) is stored in Mnesia, along with the fact that RabbitMQ nodes are classified as either DISC or RAM nodes, based on type of Mnesia tables they’re configured to use. Same applies to all other metrics WombatOAM provides; they all play a crucial role for any RabbitMQ (and Erlang system) installation.

Adding on, I/O metrics are also provided, which can also reveal vital information regarding the number of permissible client connections when specifications such as scalability come into consideration. And off course, Error Log Notifications can indicate the rate at which errors/exceptions and warnings are being reported and logged to the SASL logs and general logs, respectively, by the RabbitMQ nodes. The magnitudes of these metrics in particular, can be an easy and direct indicator that the node is experiencing problems which have, or have not yet been to be detected by the user.

Rounding up the discussion, its clear that WombatOAM proves an essential and efficient tool for monitoring any RabbitMQ installation. As already pointed out in Section 4, recommendation is to maintain an instance of WombatOAM continually, monitoring your RabbitMQ installation, and have the RabbitMQ Management Plugin on the other hand, due its resource hungry nature, only enabled for certain periods of time, when required for some of its specific control features, to use once off, and disabling it thereafter. This guarantees that during the majority periods of your RabbitMQ installation’s uptime, your nodes are dedicated to AMQP operations only, and avoid servere UI related operational overheads induced by the RabbitMQ Management Plugin. Per 24hour monitoring cycle, you could for example, employ the RabbitMQ Management plugin for no more than 2 hours only, when required, with WombatOAM monitoring continually throughout the entire cycle.

If you would like to receive a copy of this post in the form of a PDF Whitepaper, fill in your details here.

[3] Designing for Scalability with Erlang OTP

Erlang Solutions is the world leader in RabbitMQ consultancy, development, and support.

We can help you design, set up, operate and optimise a system with RabbitMQ. Got a system with more than the typical requirements? We also offer RabbitMQ customisation and bespoke support.

Learn more about our work with RabbitMQ >