John has a rich array of experience in sponsorship and media sales. Before joining ESL, he worked at traditional media organisations and ran his own sponsorship company. His experience has allowed him to earn valuable experience, all over the world, which he shares with the team at ESL.

What is the most exciting thing about working with Erlang and Elixir developers?
We work with niche languages, so our development team often face hesitancies from companies who might prefer to work with a more mainstream technology. But, once companies see the tremendous benefits that Erlang and Elixir can offer there is no going back. We’re on the forefront of making scalable and fault tolerant systems commonplace.

What is your proudest achievement working at Erlang Solutions?
The events team helps ESL build support and richen its relationship with the community. The work we do facilitates knowledge sharing that pushes the languages forward. Code Sync conferences help connect our company to ideas, talent and build relationships with other companies using the technology.

What is the biggest success story you’ve seen on the BEAM?
WhatsApp - it blows my mind every time you look at the figures. 450 million daily users, 65B daily messages sent and 2B minutes of calls. How is this possible.. by a little known programme language created by Ericsson over 20 years ago!

What excites you about the future of Erlang and Elixir as programming languages?
Erlang has always been a closely guarded secret by some of the world’s tech giants and will continue to be adopted for anything that requires fault tolerance and scalability to billions of users. Elixir on the other hand, is the new kid on the block and is now openly used by more and more startups and enterprises as they simply need something that can scale and adapt as they grow. One of the benefits that of Erlang & Elixir that we sometimes forget, is the way that adopting them can reduce the amount of physical infrastructure a company needs. Just look at Bleacher Report, they were able to go from 150 servers to 5. You can only imagine how environmentally and financially friendly that is.

Which industries do you think would most benefit from working with the BEAM?
FinTech, IoT, Gaming, Transport, Infrastructure and Machine Learning. There are also some very exciting developments with the car industry using intelligent systems from driverless cars to car sharing. The future of technology requires scalability, and so Erlang & Elixir will almost always be a good fit.

What excites you about the future of Erlang Solutions?
We are a company that is prepared to adapt to face the challenges of the multicore era.

What is your favourite part of working at Erlang Solutions in general?
Working with a great conference and marketing team within an industry that is welcoming to everyone without any agenda. 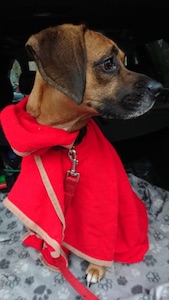 Tell us about the inspiration for the name?
Long story, I am a Beatles fan, but that wasn’t the reason.

What are people’s reactions to the name?
It’s a cool dog name.

What breed is he?
Beagle Boxer, or otherwise known as a Bogle which sounds like something from Harry Potter

What is your favourite way to spend a day with Ringo?
On the beach or long walks in the country followed by curling up on the sofa with a beer and a bone. (Beers for me)

Tell us one great story about you and your dog?
Most are too disgusting and usually involves him eating something he shouldn’t. But one less offensive tale… My wife likes to bake and one Christmas she had just baked 3 fruit cakes for our relatives. Ringo obviously felt left out so literally as soon as my wife turned her back he ate half from each in seconds. He was immediately rushed to the vet to have his stomach pumped. After the cakes were brought back up a vet nurse walked into the room and declared “oh what a beautiful smell of cake”.

Anything else we should know about Ringo?
He seems to take a particular issue with German Shepherds.

We are looking for both experienced and junior developers with knowledge of functional programming languages such as Erlang, Clojure, Haskell, Scala and the imperative languages like C, Java and Objective-C. The right candidate will join small teams of highly skilled systems engineers developing software using Erlang/OTP. You will gain valuable experience in exciting state-of-the-art systems within the Telecom, Financial Services, Banking, Messaging and Logistics sectors. As our clients are spread on six continents, there will be an opportunity to travel if you’re up for it.

The minimum education needed to apply is a Degree or Masters in Computer Science, or related subject.

We are looking for experienced developers with knowledge of functional programming languages such as Erlang, Clojure, Haskell, Scala and the imperative languages like C, Java and Objective-C. The right candidates will join small teams of highly skilled systems engineers developing software using Erlang/OTP. You will gain valuable experience in exciting state-of-the-art systems within the Telecom, Financial Services, Banking, Messaging and Logistics sectors. As our clients are spread on six continents, there will be an opportunity to travel if you’re up for it.

Equal opportunities: We are an equal opportunities employer and we encourage applications from suitably qualified and eligible candidates regardless of sex, race, disability, age, sexual orientation, gender reassignment, religion or belief, marital status, or pregnancy and maternity.

Minimum Education of Senior Erlang Developer: A Degree or Masters in Computer Science, or related subject.

The world is catching up with Elixir, Erlang and OTP technology - there is more demand than ever for fast delivery of reliable, secure and scalable systems in Fintech, Healthcare, Telecommunications, Entertainment and IoT, to name but a few.

For over 20 years we’ve been providing client-focused consultancy and high tech capabilities to build transformative solutions for the world’s most ambitious companies, and to grow Erlang and Elixir communities world-wide.

Currently we are looking for experienced developers for whom engaging with clients and leading them to embrace and succeed with Elixir sounds exciting. Our goal is to provide technical solutions to complex problems. We work with clients who range from start-ups to Fortune 500 companies, including WhatsApp, Cisco, Klarna, Motorola, Ericsson or Bloomberg, to mention a few. Talented people are always welcome, and we are currently looking for Elixir and Senior Elixir Consultants with good demonstrable commercial experience.

Curious. Analytical. Versatile. Conscientious. Creative. Helpful. Considerate. Generous. Flexible. These are the qualities of a great consultant. Above all, you have a passion for Elixir. The right candidates will join small teams of highly skilled systems engineers developing software using Elixir, often in conjunction with other technologies. You will gain valuable experience in exciting state-of-the-art systems within the Telecoms, Financial Services, Messaging, Gaming and IoT sectors.

Versatility and flexibility is the whole point of being a consultant, and we guarantee you will learn, grow and get out of your comfort zone since our customers have different business needs, logics, technologies and environments.

In this setting, your ability to be a team player is at least as important as your ability to learn new things quickly and solve tricky problems, as is your passion for working with Erlang/Elixir/OTP technology, and building reliable, secure and scalable systems serving millions of parallel users, handling billions of transactions per day. Finding joy in sharing what you’ve learned is also something we’re looking for.

We sent you a confirmation email to let you know we received your enquiry. One of our colleagues will get in touch with you shortly.