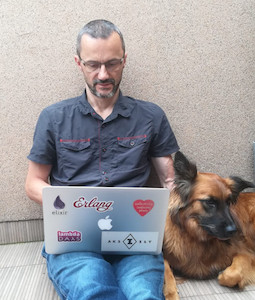 Meet Bartek, one of the talented developers working on MongooseIM.

Bartek started his professional life as an economist but felt a lack of satisfaction in his work because there was nothing tangible to show for it at the end of the day. He moved into computer programming because it allowed him to build things with a finished end product. He originally started programming in Python; he then used Perl, C++ and Java. When Bartek eventually found Erlang, he knew that it was the language he wanted to work with.

How did you start working on the beam?
I was working on a complex project in Python; it was a real struggle. I found RabbitMQ, and it worked like a charm. The project got so much easier. So, I took a look under the hood of RabbitMQ and discovered Erlang. That was a lightbulb moment, I thought ‘bloody hell’ this is the language I should have been working with all along. I even went back and rewrote some of the old code in Erlang.

What makes Erlang the top dog in the programming world?
I think it is the most intuitive way to code, in that it matches a real-world mindset. The notion of a strict separation of concerns just makes sense. For example; one process does one thing, while another process does another. The way message passing happens in Erlang kind of acts the way a team would in the real world.

What is your greatest achievement working at Erlang Solutions?
Two years ago, I noticed an opportunity for significant improvement in MongooseIM, but it required a major refactoring, it impacted nearly every line of code. Pure refactoring was really needed. Luckily, the team are supportive and want to make the best product. As a result, we were able to improve the product.

What is the best thing about working at Erlang Solutions?
You get to work all over the world, I’ve worked in Russia, Bangladesh and India, just to name a few. Working with overseas teams is a real eye-opener; it makes you wiser. You get to make friends from all over the world. When you’re a tourist, you see the parts of a country that is designed for tourists, but when you’re working with people, you see what life in the country is really like. Also, working on MongooseIM, in Erlang, we can make deep and advanced customisations in weeks, using a relatively small amount of code. That would be difficult to do at other companies or in any technologies.

Now, tell us about your awesome dog Bonnie.
My dog Bonnie is a mixed breed, but she definitely looks like a Belgian Shepherd, only smaller. I got her from a shelter, and she’s just exceptional. She may look like a Belgian Shepherd, but she has the spirit of a Border Collie, she’s so fit and full of energy and a bit crazy. She’s a total workaholic; she never leaves you alone because she always wants to be chasing something, she tires me out sometimes. You can see all your crazy tricks and skills in the video below. We’re actually trying to get her into the Guinness Book of World Records in the next month. Watch this space.

MyTopdogStatus Do you love Erlang, Elixir and dogs? Then don’t miss any of the action from #MyTopdogStatus. Head to our hub page for more profiles from the team, videos from the community and blogs about who is using Erlang and the companies using Elixir.

Want to join the pack? We’re always looking for amazing talent to join our team, head to our careers page for open opportunities and apply to the one that suits you.

We are looking for both experienced and junior developers with knowledge of functional programming languages such as Erlang, Clojure, Haskell, Scala and the imperative languages like C, Java and Objective-C. The right candidate will join small teams of highly skilled systems engineers developing software using Erlang/OTP. You will gain valuable experience in exciting state-of-the-art systems within the Telecom, Financial Services, Banking, Messaging and Logistics sectors. As our clients are spread on six continents, there will be an opportunity to travel if you’re up for it.

The minimum education needed to apply is a Degree or Masters in Computer Science, or related subject.

We are looking for experienced developers with knowledge of functional programming languages such as Erlang, Clojure, Haskell, Scala and the imperative languages like C, Java and Objective-C. The right candidates will join small teams of highly skilled systems engineers developing software using Erlang/OTP. You will gain valuable experience in exciting state-of-the-art systems within the Telecom, Financial Services, Banking, Messaging and Logistics sectors. As our clients are spread on six continents, there will be an opportunity to travel if you’re up for it.

Equal opportunities: We are an equal opportunities employer and we encourage applications from suitably qualified and eligible candidates regardless of sex, race, disability, age, sexual orientation, gender reassignment, religion or belief, marital status, or pregnancy and maternity.

Minimum Education of Senior Erlang Developer: A Degree or Masters in Computer Science, or related subject.

The world is catching up with Elixir, Erlang and OTP technology - there is more demand than ever for fast delivery of reliable, secure and scalable systems in Fintech, Healthcare, Telecommunications, Entertainment and IoT, to name but a few.

For over 20 years we’ve been providing client-focused consultancy and high tech capabilities to build transformative solutions for the world’s most ambitious companies, and to grow Erlang and Elixir communities world-wide.

Currently we are looking for experienced developers for whom engaging with clients and leading them to embrace and succeed with Elixir sounds exciting. Our goal is to provide technical solutions to complex problems. We work with clients who range from start-ups to Fortune 500 companies, including WhatsApp, Cisco, Klarna, Motorola, Ericsson or Bloomberg, to mention a few. Talented people are always welcome, and we are currently looking for Elixir and Senior Elixir Consultants with good demonstrable commercial experience.

Curious. Analytical. Versatile. Conscientious. Creative. Helpful. Considerate. Generous. Flexible. These are the qualities of a great consultant. Above all, you have a passion for Elixir. The right candidates will join small teams of highly skilled systems engineers developing software using Elixir, often in conjunction with other technologies. You will gain valuable experience in exciting state-of-the-art systems within the Telecoms, Financial Services, Messaging, Gaming and IoT sectors.

Versatility and flexibility is the whole point of being a consultant, and we guarantee you will learn, grow and get out of your comfort zone since our customers have different business needs, logics, technologies and environments.

In this setting, your ability to be a team player is at least as important as your ability to learn new things quickly and solve tricky problems, as is your passion for working with Erlang/Elixir/OTP technology, and building reliable, secure and scalable systems serving millions of parallel users, handling billions of transactions per day. Finding joy in sharing what you’ve learned is also something we’re looking for.

We sent you a confirmation email to let you know we received your enquiry. One of our colleagues will get in touch with you shortly.